How Does the Moon Affect Your Cannabis Plants When You Crop Out? 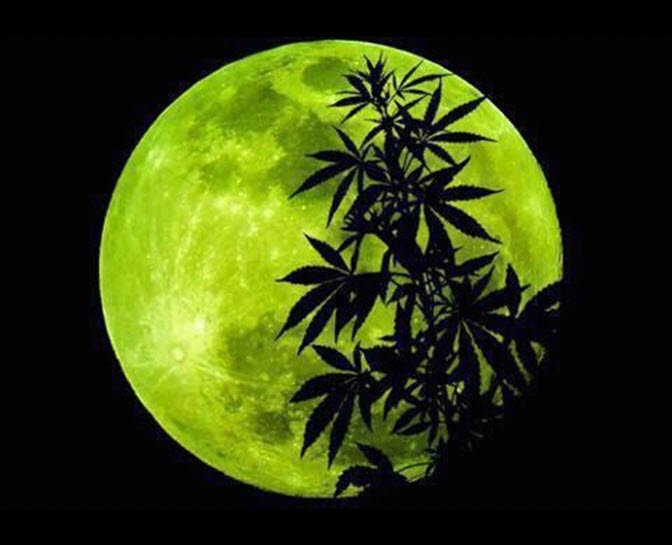 A friend of mine recently asked me about cropping out under the moon. While I have heard of this before, I never really looked into it since most of my cannabis grows have been indoors. However – for the sake of being a good friend I decided to delve deeper into the intricacies of lunar cycles and the effects on cannabis crops.

It turns out that cropping with lunar cycles have been an occurrence for thousands of years. American Natives, agriculturalists and gardeners know that if you want to have faster germination, or longer lasting weed – you have to consider what mother moon is up to.

I am not 100% certain where I heard the following story so I may be completely off on this – but I’ll relate it anyway.

The story goes that when Native Americans chose the wood for their bows, they would have to cut down the limb of a tree on the Full Moon. If someone were to ask “why” then they would be instructed to find out by trial and sub-sequentially would cut down limbs of trees and burry them in the ground on different phases of the moon.

At the end of the entire lunar cycle, they would revisit the different limbs buried at different lunar cycles. Every single time – the branch that was cut on a full moon would be firm, strong, everything would be well-preserved.

Yet the other ones, for example on the New Moon or Crescent moon – these branches would be brittle and break easily.

If you’re going to be making a bow to defend yourself against wild animals – the strength of the material is important and thus, harvesting on a full moon was the advice of the land.

But why? What made the tree limbs preserve themselves more by harvesting on the full moon?

The moon goes through several different phases, but there are two main principles – Waning and Waxing. When the moon is Waxing, it essentially means that the moon is moving from the New Moon towards the Full Moon.

Waning is what happens when the Full Moon goes back to the crescent moon.

Generally speaking, when the Moon is waxing, plants put effort into developing leaves and above-ground systems, when it is waning, plants will put more energy into their root system. This means you should sow a leafy crop that develops above the ground, like cannabis, during a waxing Moon. – Source

As such here’s a few things you can take into consideration.

Crescent Moon [waxing] – This is the best time to germinate. Seeds sown at this time will have a higher rate of germination. If you’re dealing with expensive seeds – this is a PRO TIP

Gibbous Moon Phase – this is between first quarter moon and full moon [waxing] or the state between the full moon and the first quarter [waning]. During this phase the nutrient and water intake is greater as the gravitational pull of the moon draws the water up the plant.

The balsamic moon phase – which is where we get close to the crescent moon area again – is the best time for harvest. This is because unlike the Native American – you don’t want to have cannabis with a lot of water in it. You want it to be more on the starved part – so that there is an increase in resin production.

It’s the reason you flush. Thus, if you want to quickly cure, the balsamic phase is the best. However – if you’re looking for shelf life – then perhaps cropping out under the full moon might not be a bad idea. At least when it comes to food crops, this makes perfect sense.

However – considering that cannabis requires curing, it may be counter-productive on a large scale and would increase the chance of mold developing. For the “Stay-at-home” growers out there, try cropping out near the new moon cycles and perhaps keep one plant for a full moon phase and test it yourself.

I will be messing around with lunar cycles on my next grows and will write an update article on this in the near future. In fact – I’m going to be assisting one of my friends with his harvest in the coming weeks and we’ll be doing an experiment.

It will take a few weeks to compile the data and to compare the buds, but I’ll let you know how it went.

Nonetheless – I think it’s fascinating that we have to not only consider the solar cycles but lunar cycles as well when we’re cultivating cannabis. It just goes to show how those heavenly bodies do impact us all on an internal plane.

Let me know if you crop out under a new moon or a full moon or if you simply don’t give a shit.

CANNABIS CULTURE –   “I’m so blessed to be released but…

Texas’ Medical Marijuana Program Is One Of The Most Restrictive In The Country. Advocates Hope The Legislature Will Change That.

“This program will generate much-needed revenue, while allowing us to support…

During those long, harmful years of cannabis prohibition, there were pretty much only…