Can CBD Help Animals with Depression? 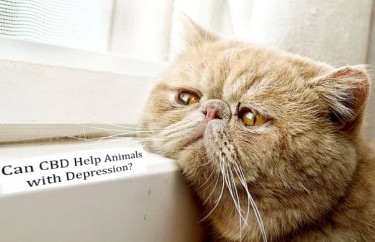 Depression is a silent killer among us humans: the dreadful feeling of guilt, the accompanying anxiety, losing our sense of pleasure, not having the energy to go about with our day or see people…

These are just some of the symptoms associated with depression. Anyone who has ever felt depressed or goes through depression can tell you that these symptoms are powerful and one can only wish for it to go away. Thankfully, cannabidiol (CBD) has been a breakthrough medication for depression and anxiety. There have been many proven ways CBD has been shown to help people fight depression.

For one, CBD helps enhance the happy hormones in our body, including serotonin. The increase of serotonin in the brain assists us in overcoming anxiety, depression, and stress (which also causes depression). Another way it helps treat depression is by regulating the endocannabinoid system, which is critical for maintaining several of the body’s most important functions.

But did you know animals can feel depressed too?

Though animals are unable to communicate the signs of depression the way we can, that doesn’t mean they don’t get depressed too. Studies show that anhedonia, a loss of interest in pleasurable activities, is an aspect of depression that can also be seen in animals. In a National Geographic interview with Olivier Berton, an Assistant Professor of Neuroscience at the University of Pennsylvania, who revealed more about animal depression.

“Definitely the most convincing observations derive from nonhuman primates. Based on behavioral observation, trained observers can say a monkey looks depressed. Because their emotional behaviors are similar to that of humans, just by looking at their facial expressions or the way their gaze is directed, we can get an indication of whether an animal may be experiencing sadness,” Berton explains.

You might be wondering WHAT on earth could animals get depressed about. But just like us, they could get depressed for many reasons: being physically sick, grieving, and environmental changes to name a few could trigger them to feel depressed and anxious. Dogs in particular are empathetic, and many tend to mirror the mood of their owners so if you’re depressed then your dog may be feeling it too. Dogs can manifest depression when they have shown a loss of interest in self-care, when they choose to spend long hours hiding, whining, whimpering, being mopey, sleeping excessively, or excessively licking and chewing, or a lack of appetite.

However, there’s still much we don’t know about animal depression though the potential of CBD to help has piqued researchers.

At the Warsaw Zoo in Poland, a young elephant named Fredzia was showing signs of depression after another elephant named Erna had passed away in March. This made the zookeepers look for a creative way of treating Fredzia. While the other 2 elephants in the herd were able to adapt, the same was not true for Fredzia. “This is a huge game-changer in every elephant group. Elephants might have behavioural problems when the structure of a group changes,” explains Dr. Agnieszka Czujkowska, who oversees the Animal Rehabilitation department at the zoo.

When Erna died, the zoo keepers said that Fredzia showed symptoms of grief and hasn’t shown any improvements. However, they will be trying a cannabis oil treatment on her as an experiment and hope that it helps the elephant get along with the others while restoring balance in the herd.

Dr. Czujkowska will be overseeing the cortisol levels among the elephants, since it is the stress hormone released in the bodies of both humans and animals when they are undergoing stressful situations. “We are planning to give them the CBD and measure the cortisol gain. This is the experiment. Then we know for sure if the oil is working or not,” Dr. Czujkowska says.

According to Professor Caitlin O’Connell from Stanford University, CBD would be ideal for treating the Warsaw zoo herd since it’s been known to provide stress relief for humans. “Elephants do appear to display similar behaviors to our own in the context of loss, and since we share the same hormones, anything that helps reduce anxiety seems worth trying,” she told The Independent.

They have already finished the first phase of the trial, involving the collection of fecal, blood, and saliva matters from the elephant to assess cortisol levels. There is no need to worry about the animals getting high from the oil since it doesn’t cause impairment due to the absence of THC. “It’s not very potent. The only side effect will be some behavioral changes,” Dr. Czujowska explains. “We will have to manage these to achieve the results we want.”

Though we await the results,

It’s fascinating that CBD can not only help depressed humans but dogs as well. It’s a calming natural medication that can regulate feelings and their appetite, and can restore them back to normal.

If you want to try medicating your dog with CBD, be sure to use a product that has been specifically formulated for dogs. Ask a vet who has experience treating pets with CBD as they can provide valuable insight on the right dosage which will differ based on the oil’s potency, your dog’s weight, and the problems they may have. You will be amazed at how CBD can help regulate your furry family member’s serotonin levels and calm them down in a way nothing else can.

Aside from CBD oil, there are also many CBD infused treats out there, as well as full spectrum CBD oil for dogs that is administered through a dropper. For the best results, help your dog recover by providing mental and physical stimulation and giving them proper food as well as veterinary care on a regular basis.

8 of the Best Strains for Finding New Music

When it comes to finding new music, there’s no magic weed strain to make the…

Everything you need to know about the Volcano Hybrid

The Volcano by Storz & Bickel is one of the most iconic vaporizers of all time.…